RASA Performance Made for Everyone

The 8” RASA is an imaging telescope that delivers a flat field without optical aberrations for razor sharp stars across a wide field of view. It can capture stunning deep-sky astronomical images without the challenges typically presented by longer focal length instruments at a fraction of the cost of those systems.

The latest addition to the RASA family, this 8” version is a much more portable and affordable version of the heralded RASA 11, which was introduced to much acclaim in 2014. With the 8” RASA joining the lineup, a wider range of astroimagers can enjoy the benefits of the RASA design. It has many of the same thoughtfully designed features as its “big brother” RASA 11, including the integrated air-cooling system, internal filter mount, and sturdy CGE dovetail mounting bar.

Purely designed for imaging, the 8” RASA cannot be used visually. The prime focus focal plane is located at the front of the optical system, so it cannot accommodate a traditional eyepiece.

Since it is an F/2.0 optical system, imagers can use shorter exposure times to capture detail in faint objects. When combined with sensitive cameras and the proper “live stacking” software, the 8” RASA can provide an almost real-time observing experience. View images on a computer instantly that are brighter and more detailed than can be seen in much bigger telescopes with the naked eye.

Because shorter exposure times are possible, your equatorial mount won’t need to accurately track over extended periods. The 8” RASA’s relatively short 400mm focal length also lessens equatorial tracking demands. In many cases, autoguiding will not be required. Weighing only 17 lb, this optical tube pairs perfectly with a wide variety of mounts.

With the launch of the 8” RASA, Celestron is unveiling a new focuser design that mitigates lateral movement of the primary mirror when focusing, slewing, or tracking with the astrograph. Focusing is easier, more accurate, and more stable than ever. The key to the Ultra-Stable Focus System is two sets of precision bearings that are precisely aligned and tested during assembly to ensure optimal results.

Unlike the larger RASAs that work with DSLR and large CCD cameras, the 8” model was designed with color astronomical CMOS cameras, smaller CCD cameras, and mirrorless cameras in mind. The telescope does not work with standard DSLR cameras. It is optimized for sensors with up to a 22mm diagonal, but performs well with sensors up to 32mm diagonal. The APS-C sized sensors used in many mirrorless cameras are a good choice. 42mm full frame sensors will also work, but performance will be poor at the edges of the sensor and field illumination will be reduced. Additionally, we do not recommend pairing RASA 8 with any camera body more than 4” in diameter. See the chart below to determine if your camera is compatible with RASA 8.

RASA’s optical design is patented (US 2016/0299331 A1). The design consists of a Schmidt corrector, primary mirror, lens group, and optical window. The lens group contains 4 elements and utilizes rare-earth elements. Unlike many telescopes that only perform well over the visible spectrum (400-700nm), the 8” RASA’s optics are designed to perform over a wider spectral range, from 390-800nm. This allows more of the light emitted from the astronomical object to be sharply focused in the image.

With many imaging systems, adding an extra piece of flat glass such as a filter does not change optical performance. However, that is not the case with super-fast optical systems like the RASA. Our engineers addressed this by designing the RASA with a removeable optical window, so you can maintain peak optical performance if a filter is added or if a camera has its own optical window. Celestron offers a Light Pollution Imaging Filter designed specifically for the 8” RASA, which mounts in place of the optical window. Frequently Asked Questions
Q: Why can’t the Rowe-Ackermann Schmidt Astrograph (RASA) 8 be used visually?
A: The optics produce an image at the front end of the telescope, not the back. Therefore, you cannot look through the RASA 8 with your eyes because your head will block the light from entering the telescope. The RASA 8 is an astrograph designed specifically for deep-sky astronomical imaging.Q: Why was the RASA 8 designed to have a camera mount at the front of the telescope?
A: The RASA 8 optical design uses a prime focus focal plane position in order to obtain its super-fast F/2.0 focal ratio. This necessitates the camera having to be mounted at the front of the astrograph.Q: Won’t the camera block the incoming light?
A: The RASA 8 optical design has its own central obstruction which is caused by the sub-aperture lens assembly at the front of the telescope. The lens assembly has an outer diameter of 93mm. If a camera’s body is smaller than this, it will not block any light from reaching the camera sensor. If the camera body is larger than this, then it will block some of the incoming light. As long as the camera body does not greatly exceed about 120mm diameter, the effect on images is negligible.Q: What cameras can be used with the RASA 8?
A: The RASA 8 can be used with many astronomical CMOS and CCD cameras. It also works well with mirrorless digital cameras. Two key considerations are the size of the camera body (should not exceed about 120mm in diameter), and the camera’s backfocus distance (cannot exceed 25mm). Color or monochrome sensors can be used, although color sensors are easiest to use since the RASA 8 cannot accommodate a filter wheel (see question #7).Q: Why can’t a DSLR be used with the RASA 8?
A: The body size of a DSLR is too large compared to the front aperture of the RASA 8, and therefore blocks too much of the incoming light. Also, the DSLR requires too much backfocus (55mm) for the RASA 8, so the camera sensor cannot be placed at the required location relative to the astrograph. For DSLR imaging, we recommend the RASA 11.Q: What about camera cables in front of the optics?
A: Camera cables which cross the front of the RASA 8 do not block much light and, don’t have a significant effect on images. To minimize any potential diffraction spike around the brightest stars, camera cables can be positioned to cross the aperture in a curved pattern, rather than a straight line.Q: Will I need additional camera adapters for my camera?
A: It depends on what camera you are using. For cameras with a C-mount, no additional adapters are required. For cameras which mount with a 42mm thread, a 42mm (or T-thread) spacer ring to place the camera sensor at the proper backfocus distance relative to the optics will be needed. (Note: With the included 42mm camera adapter, the backfocus distance required is 25mm. So, subtract the backfocus distance specification for your camera from 25mm, and that is the length of the M42 spacer ring you will need. If the camera has a backfocus distance of more than 25mm, it cannot be used with the RASA 8.) For Sony and Canon mirrorless cameras, Celestron offers optional camera adapters. For other cameras, a custom camera adapter will be needed.Q: What is the difference between the image circle and the useable field?
A: The image circle is the diameter at the focal plane (i.e. where the camera sensor is positioned) which the astrograph’s performance was optimized for. The useable field is the diameter at the focal plane where the performance of the astrograph is excellent. Most astrographs only mention the useable field in their specifications.Q: What if my camera’s sensor is larger than the useable field?
A: The RASA 8 has a useable field of 32mm. A sensor with a diagonal size larger than that, such as a full-frame mirrorless camera, can be used, but there will be some drop off in optical performance and field illumination in the corners of the image. This may require cropping during image processing.Q: Can filters be used with the RASA 8?
A: The RASA 8 has a removeable optical window which can be replaced with a filter. Currently, Celestron offers a Light Pollution Reduction Filter for the RASA 8. Filter “sliders” offered by some manufacturers may also work with some cameras. A filter wheel cannot be used, since the filter wheel would have to mount in front of the optics and would block too much of the incoming light.Q: Why does the RASA 8 have a removeable optical window?
A: With such a fast optical system, you cannot add a filter into the light path without adversely affecting the optical performance. With a removeable optical window, you can replace the window with a filter with no loss of performance.Q: Why is the fast focal ratio (F/2.0) of the RASA 8 such a big deal?
A: Because it allows much shorter exposures to be used to capture detail in fainter astronomical objects. This makes getting good images much easier and quicker. With a sensitive high-speed camera along with live image stacking software, you can see images in “real-time” on your computer screen.Q: What mounts can be used with the RASA 8?
A: Any mount which can accept a CGE (or Losmandy D) dovetail bar and can handle at least 20 lbs. The RASA 8 weighs 17 lbs, and you’ll also need to account for the weight of your camera and any other accessories.

Q: Will I need to collimate (i.e. align) the optics?
A: The optics are aligned at the factory, and should not normally need adjustment. However, there are screws which adjust the tilt of the lens assembly should collimation adjustment ever be needed.

Q: What is the extended spectral range (400-800 nm) and what is the benefit?
A: Most telescopes are designed to perform well over the visual spectrum (i.e 400-700nm). The RASA 8 optics were designed to perform over a wider spectral range, from 400-800nm. This means that light from 700nm-800nm will be well focused in the RASA 8, allowing more of the light emitted from the astronomical object to be sharply focused in the image. For cameras which have spectral response in the 700-800nm range, you’ll get brighter and sharper images and won’t necessarily need to use an IR-cut filter.

Q: What else might be needed with the RASA 8?
A: A finderscope can be useful for visually finding objects or for initial alignment of your computerized mount with the night sky. The RASA 8 has mounting holes for a finderscope. If doing longer exposures, you may want to consider using a guide scope and autoguider in order to provide the best tracking performance with your mount. For convenient mounting of a guide scope, Celestron offers a CGE dovetail accessory mounting bar which connects to the top of the RASA 8 and allows easy installation of guide scope rings. Perhaps the most useful accessory is a focus motor, this permits focusing from the computer which is controlling the camera and/or mount. A focus motor which is compatible with the RASA 8 will soon be introduced by Celestron.

Q: What about dew?
A: Just like any telescope design which uses a lens at the front of the telescope, the RASA 8 Schmidt corrector lens can be susceptible to dew under certain environmental conditions. To prevent dew when the outside temperature drops below the dew point, we recommend using a dew shield or dew heater. 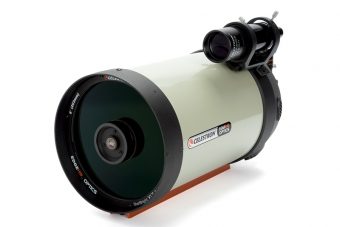 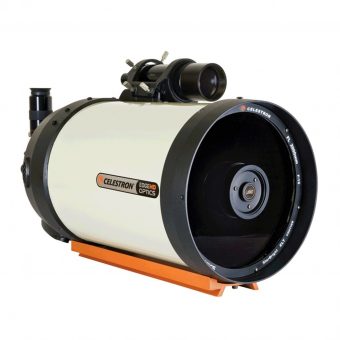 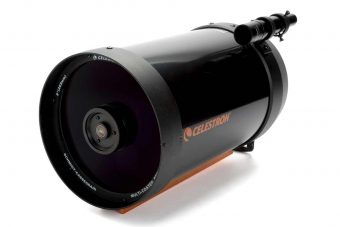 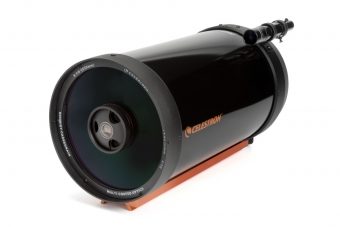 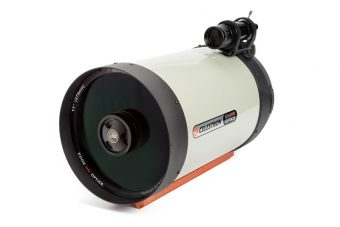 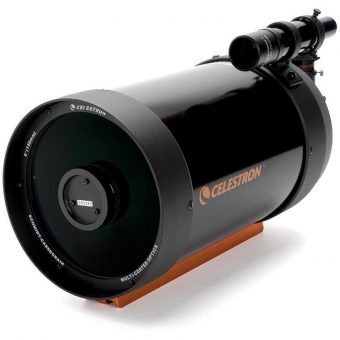 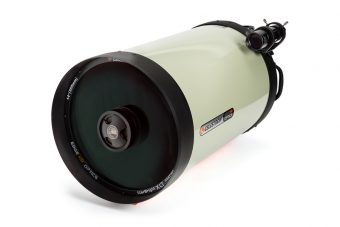 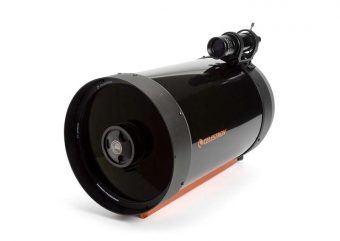